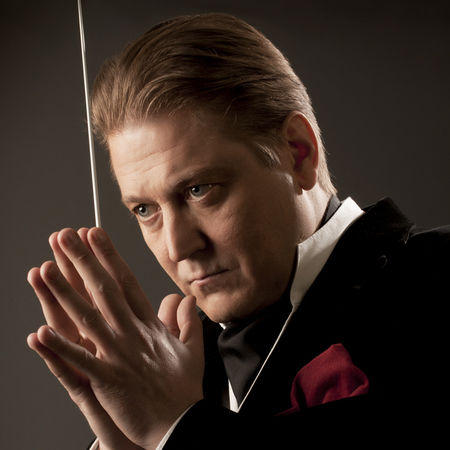 Alexander Sladkovsky is a Russian conductor, the People's Artist of the Republic of Tatarstan, the People’s Artist of Russia, who graduated from Moscow and Saint Petersburg conservatories. He is a winner of the III International Prokofiev Competition. In 2001, he conducted in a concert at the Hermitage Theater in honor of the visit of Her Majesty Queen Beatrix of the Netherlands. He assisted Mariss Jansons and Mstislav Rostropovich and from 2006 to 2010 he was a conductor of the New Russia State Symphony Orchestra under the direction of Yuri Bashmet. Since 2010 Alexander Sladkovsky is an Artistic Director and a Chief Conductor of the Tatarstan National Symphony Orchestra in the city of Kazan (Tatarstan, Russia).

The TNSO under the direction of Alexander Sladkovsky is the first Russian regional orchestra recorded by Medici.tv and Mezzo channels. Moreover, one of the concerts at the La Folle Journée festival in 2019 in Nantes was recorded and broadcasted by ARTE channel.

In 2016 in cooperation with the Melodiya record label several global musical projects were realized: the recording of three symphonies of G. Mahler (Nos. 1, 5, 9) and all symphonies and concertos of D. Shostakovich. In May 2020, the digital release of the “Tchaikovsky-2020” box set took place — a recording of all symphonies and instrumental concerts by P. I. Tchaikovsky on the Sony Classical label.

The Tatarstan National Symphony Orchestra under the direction of Alexander Sladkovsky is currently the first and only regional orchestra that has been honored to have its own annual subscription in the Moscow State Philharmonic Society.