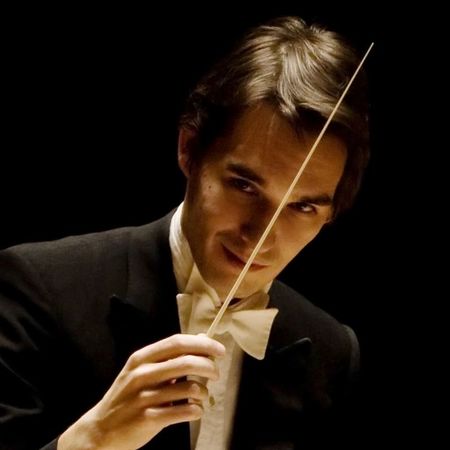 Born in Kazakhstan to a musical family, Marius Stravinsky began playing the violin when he was four-years old. Educated at the Moscow Central Music School and the Yehudi Menuhin School, he went on to become the first former-Soviet student to secure a scholarship to Eton College. He graduated from the Royal Academy of Music, London, in 2002. Stravinsky’s passion for conducting began aged 13 after playing the Bruch Violin Concerto for Mariss Jansons – now one of his regular conducting mentors.

In 1998 he spent a summer assisting Claudio Abbado in Peter Brook’s production of Don Giovanni at the Festival d’Aix-en-Provence, and his studies at the Royal Academy were led by Igor Golovchin and Thomas Sanderling, with masterclasses from Kenneth Kiesler and Eri Klas.

From 2002-2005, Stravinsky returned to Moscow to study conducting with Vladimir Ponkin, working as his Assistant Conductor in both the Moscow Philharmonic Orchestra and the Helikon Opera.  Whilst resident at Helikon Opera, his performances included fully staged productions of Berg (Lulu), Bizet (Carmen), Giorgdano (Siberia), Poulenc (Les Dialogue des Carmelites), Prokofiev (The Story of a Real Man), Rimsky-Korsakov (Kaschei the Immortal), Shostakovich (Lady Macbeth of the Mtensk District), and works by his forebear Igor Stravinsky (such as Mavra).

Stravinsky enjoys a particularly strong profile in Russia, working with top orchestras and institutions including the Russian National Orchestra, Russian Philharmonic, and the St. Petersburg Symphony Orchestra.  He regularly conducts at the Mariinsky Theatre (both in symphonic concerts and operatic performances), and enjoys a close collaboration with the State Academic Symphony Orchestra of Russia ‘Evgeny Svetlanov’ (GASO).

Resident in Berlin, Stravinsky also spends time in St. Petersburg, where during the 2016/2017 season he became Founder & Music Director of the St. Petersburg Festival Orchestra – launched with a performance of Oedipus Rex at the Alexandrinsky Theatre in February 2017.  Highlights of Stravinsky’s 2017/2018 season include productions at the Berlin Staatsballett with the orchestras of the Berlin Staatskapelle and Deutsche Oper, and debuts with the London Philharmonic Orchestra (Royal Festival Hall, London), and the Symphonieorchester des Bayerischen Rundfunks.