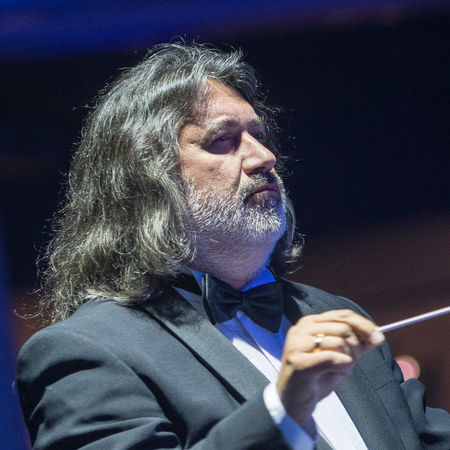 The creator, permanent artistic director and chief conductor of the Kazan chamber orchestra La Primavera. He graduated the Moscow State Conservatoire, the specialty was "violin" (the class of Prof. Irina Bochkova), and also the Kazan State Conservatoire, the specialty was "composition". In 1983-86 he was the soloist of the Tatar State Philharmonia, in 1986-96 he worked as a Director and an artistic director of the special music school-lyceum of the Kazan State Conservatoire. In 1989 Rustem Abyazov founded a chamber orchestra La Primavera, which within the shortest period became one of the most exciting musical groups of Russia.

Rustem Abyazov performs much as a violinist. He plays in various ensembles. He has toured in Russia and abroad – Hungary, Germany, Sweden, France, Greece, Tunisia, Spain, China, Turkey, Switzerland, the UK, South Korea, Israel and others.

Rustem Abyazov combines successfully performing activities and a composer’s gift. Many of his works have gained popularity, and are often performed in concerts, recorded for radio and television. He pays much attention to update and expand the repertoire of string orchestras.

"Abyazov took a full advantage of the sound of his powerful instrument and impressed with an amazing variety of tones: a warm, resonant sound in low registers opposed gentle, crystal clear sounds of tops".
Giessener Allgemeine (Germany)

"The concert fantasy on Gershwin's opera "Porgy and Bess", performed at the end of the program, showed Rustem Abyazov as a magician, whose instrument mastered all kinds of violin technique".
Giessener Anzelger (Germany)

"... Under inspirational management of the active, accurate in details conductor Abyazov, we heard a nice, very subtle, often a bit sentimental, but fresh, pleasantly tinged music - with an abundance of sound colors, rhythmic vitality and changeable dynamics ...".
Hallandsposten (Sweden)

"The festival, named after Abyazov, once again demonstrated the highest rating of the musician in the creative life of the republic: four nights in a row, his concerts-portraits - in fact, gathered full house. Rustem Abyazov and his orchestra have their listeners, many of which, owing to him, have become frequenters of the concert halls. So today, the musician can afford many things, including holding successfully the festival, named after him."
"Musical Review" (Moscow)