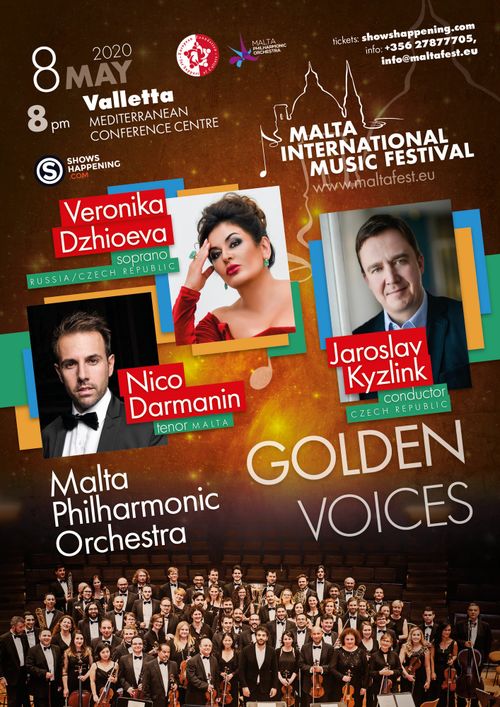 Jaroslav Kyzlink hails from Brno, where he studied conducting at the Janáček Academy of Music. In 1992 he joined the Brno Opera, initially serving as chorus master, and became a conductor in 1996. Between 2001 and 2003 he was the company’s chief conductor and artistic director. While at the Brno Opera, he worked on a number of productions; for the Janáček Brno international festival he prepared the world premiere of the original version of The Excursion of Mr. Brouček to the Moon (2010). Jaroslav Kyzlink conducted the Brno Opera at festivals both at home and abroad including Japan (2001, 2003). In 2003 he established collaboration with the Slovak National Theatre Opera, in 2004–2006 he was its chief conductor. In 2008, he prepared Gluck’s Orfeo ed Euridice  for the Slovak National Theatre in Bratislava and Teatr Vielki in Warsaw.
READ MORE ↓

Veronika is a Honored Artist of the Russian Federation, People's Artist of North and South Ossetia. Veronika Dzhioeva graduated from the St. Petersburg Conservatory (the class of Professor T. D. Novichenko) in 2005. The singer made her opera debut in February 2004 in the role of Mimi. Today Veronika Dzhioeva is one of the most popular singers both in Russia and far beyond its borders. She has performed in the UK, Germany, France, Switzerland, Austria, Spain, Italy, Czech Republic, Sweden, Estonia, Lithuania, the USA, China, Hungary, Finland, South Korea and Japan. Her roles include the Countess (The Marriage of Figaro), Fiordiligi (Cosi Fan Tutte), Donna Elvira (Don Giovanni), Gorislava (Ruslan and Lyudmila), Yaroslavna (Prince Igor), Marfa (The Tsar's Bride), Tatiana (Eugene Onegin), Micaela (Carmen), Violetta (La Traviata), Elizabeth (Don Carlo), Lady Macbeth (Macbeth), Tais (Tais), Liù (Turandot), Martha (The Passenger). Veronika Dzhioeva is a leading soloist of the Novosibirsk Opera and Ballet Theatre and a guest soloist at the Bolshoi and Mariinsky Theatres.
READ MORE ↓

Veronika is a Honored Artist of the Russian Federation, People's Artist of North and South Ossetia. Veronika Dzhioeva graduated from the St. Petersburg Conservatory (the class of Professor T. D. Novichenko) in 2005. The singer made her opera debut in February 2004 in the role of Mimi.

The role of Fiordiligi in Cosi Fan Tutte by Mozart under Teodor Currentzis (Moscow International Performing Arts Centre, 2006) made the first great impression on the capital's audience. Another resonant stage appearance was the role of Princess Urusova in Boyarynya Morozova, a choral opera of Rodion Shchedrin, at the Metropolitan. In August 2007, the singer performed the role of Zemfira (Aleko by Rachmaninoff) under Maestro Mikhail Pletnev.

Participation in the premiere of Aleko under Maestro Valery Gergiev at Mariinsky Theatre in St. Petersburg, as well as in Baden-Baden, was a great success. In November 2009, Veronika performed the role of Micaela in Carmen by Bizet in a staging of A. Stepanyuk at the Seoul theatre. Veronika Dzhioeva cooperates with the European theaters and orchestras, including the Teatro Petruzelli (Bari), Teatro Comunale di Bologna, Teatro Real (Madrid). In Palermo (Teatro Massimo), the singer has performed the title role in Donizetti's Maria Stuart and at the Hamburg Opera this season - Yaroslavna (Prince Igor). Veronika Dzhioeva contributed to the success of Suor Angelica by Puccini in the title role of Sister Angelica at the Teatro Real in Madrid. In the USA, the singer made her debut on the stage of the Houston Opera as Donna Elvira.

The singer’s concert and recital repertoire embraces various epochs and styles. She sang soprano parts in Requiem by Verdi and Mozart, symphony No. 2 by Mahler, symphony No. 9 by Beethoven, The Great Mass by Mozart (conductor Yuri Bashmet) and in Rachmaninoff's The Bells. Some of the recent significant events are the performance of The Four Last Songs by Richard Strauss and Verdi's Requiem in France with the Orchestre National de Lille under Casadesus, as well as Verdi's Requiem in Stockholm under Laurens Rene.

The works of contemporary authors have a significant place in the concert repertoire of Veronika Dzhioeva. The Russian public was impressed by The Running Time by B. Tishchenko and The Crying Guitar by A. Minkov. Separated by Winter musical fantasy of the young St. Petersburg composer A. Taranov was successfully performed in Bologna under O. Joju (Brazil).

In April 2011, the audience of Munich and Lucerne applauded to her interpretation of Tatiana part in Eugene Onegin with the Symphony orchestra of the Bavarian radio under Mariss Jansons. The collaboration with Maestro Jansons continued with soprano part in symphony No. 2 by Mahler with the Royal Concertgebouw orchestra in Amsterdam, St. Petersburg and Moscow.

Veronika Dzhioeva’s recent appearances include the title roles of Thais under Patrick Furnilier at Helsinki Opera, Iolanta under Yang Latham Koenig at the Prague Opera, the premiere of the part of Amelia in Un Ballo in Maschera and the soprano part in Verdi's Requiem in Prague under Jaroslav Kinzling.

She toured with the London Symphony Orchestra and conductor Jac van Steen in London, Warwick and Bedford, and performed a soprano part on the stage of the Bozar concert hall in Brussels under Hartmut Heanheal. In Valencia, she sang Madina's part in the opera Breach in a staging of the famous director P. Azorin. She performed the soprano part in the Verdi's Requiem in the main concert hall of Stockholm. In March 2016, Veronika appeared in the opera house of Geneva as Fiordiligi. The first festival of Veronika Dzhioeva "Space of the Opera" was held in her native town Tskhinval in 2016, and subsequently in the Novosibirsk Opera and Ballet Theatre and Novaya Opera theatre in Moscow in 2017. In November 2017, Veronika sang the part of Tatiana in Japan under Maestro Vladimir Fedoseyev.

One of her most popular recordings is the album "Opera Arias". In 2007, she released a new CD album, recorded in collaboration with the Chamber Orchestra of the Novosibirsk Philharmonic society. One can hear Veronika Dzhioeva’s voice often in TV movies ("Monte Cristo", "Vasilevsky Island", and others). In 2010, a television documentary Winter Solo Wave about Veronika Dzhioeva was released.

Her plans include several concerts in Prague with the best symphony orchestras of Czech Republic. At present, Veronika is rehearsing the parts of Aida, Elizabeth in Tannhauser and Marguerite in Faust at Russian and European theaters.

Veronika has been a member of Jury at numerous national and international contests, jointly with famous musicians, such as Elena Obraztsova, Leonid Smetannikov, and many others.

In 2014 Veronika was awarded the honorary title “The People's Artist of Ossetia”, the highest artistic title of the republic. In 2014, Veronika was nominated for Golden Mask Best Actress award for the role of Elisabeth of Valois in the production of Don Carlo at the Bolshoi Theatre. In 2014, Veronika received the "Person of the Year" award of South Ossetia republic.

The Maltese tenor Nico Darmanin is now well established in the Bel Canto repertoire, having performed at the Royal Opera House, Covent Garden, Glyndebourne, Welsh National Opera, Scottish Opera, Opera Vlaanderen, the Wexford Opera Festival and the Rossini Opera Festival in Pesaro. Nico Darmanin studied at the Royal College of Music and the National Opera Studio. He made his debut at the Royal Opera, Covent Garden as Danieli  (Les Vepres Sicilennes) under Pappano, a production which won an Olivier award, soon returning as Apparition of a Youth (Die Frau ohne Schatten) under Bychkov which won Best Opera at the South Bank Sky Arts Awards.
READ MORE ↓

His discography includes world premiere recordings of songs by Massenet and Sullivan's Shore and Sea, both with Richard Bonynge, and he has appeared in recitals in the US and Canada as well as recitals at the Three Palaces Festival in Malta and Washington, Messiah with Nederlandse Reisopera, Rodolfo in La Boheme in concert for Kensington Symphony Orchestra aswell as Osiride in Rossini's Mosé in Egitto and Nicias in Massenet’s Thais at the Cadogan Hall for Chelsea Opera Group.

Nico has recently performed the role of Alberto in La Gazzetta at the Salzburger Landestheater and the role of Ernesto for Welsh National Opera on tour.  In 2019 he debuted two major operatic roles with Romeo in Gounod's Romeo et Juliette at the Estonian National Opera and Rinuccio in Puccini's Gianni Schicci at the Tiroler Landestheater in Innsbruck. Later in the season he will be returning to one of his favourite roles, Don Ramiro from Rossini's La Cenerentola for The Grange Festival conducted by David Parry.

For half a century, the Malta Philharmonic Orchestra has been Malta’s leading musical ensemble. The orchestra was founded in April 1968, when musicians from the defunct “C-in-C” Orchestra of the Malta-based British Mediterranean Fleet regrouped as the Manoel Theatre Orchestra. It continued to serve as the theatre’s resident orchestra until September 1997, when it became an independent orchestra, taking up National Orchestra of Malta as its name. The orchestra became the MPO in 2008 when it expanded into a full-size symphony orchestra, bringing together the best of Maltese talent and musicians from Europe and beyond.
READ MORE ↓

Joseph Sammut, the C-in-C’s last conductor, was the orchestra’s first conductor, remaining at the helm until 1992. Since then, the orchestra has also been under the direction of Joseph Vella, Michael Laus, and Brian Schembri.

This season, the MPO has appointed Raoul Lay as its Artistic Director, together with Sergey Smbatyan as Principal Conductor and Michael Laus as Resident Conductor. The MPO also works with local and international guest conductors and soloists including Lawrence Renes, Michalis Economou, Guy Braunstein and Enrico Dindo.

As Malta’s only professional orchestra, the MPO averages more than one performance a week including symphonic concerts, opera productions in Malta and Gozo, community outreach and educational initiatives, as well as various concerts of a lighter nature.

The orchestra has performed in leading venues across the globe, including in the USA, Russia, Germany, Austria, China, Italy, and Belgium. Presently it embarks on at least one international tour each concert season.

The MPO is a keen exponent of Maltese composers, regularly performing their works in Malta and overseas, as well as frequently premiering and commissioning new compositions.

Through the MPO Academy and the Malta Youth Orchestra, which itself regularly gives concerts around Malta, the MPO is also responsible for the training and professional development of the next generation of Maltese musicians.

Aria of Lauretta
from Gianni Schicchi *