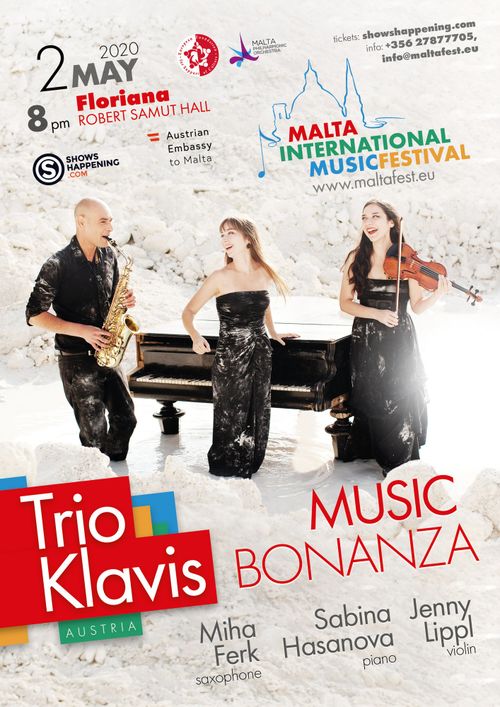 Trio Klavis has established itself as an exceptional new chamber-music ensemble, attracting international attention with their unique combination of instruments and impressively diverse repertoire. Through engaging and creative programming, Trio Klavis invites their audience on a journey through wildly different worlds of music, from the elegant classical era to the age of dodecaphony, from masterworks of the great Romantics to original works inspired by ancient folk melodies, all the while exploring new jewels of the 21st century by living composers. Trio Klavis has enjoyed great success with its dazzling programs on prestigious stages all around the world, including Tonhalle Zürich in Switzerland, St. Petersburg Philharmonie in Russia, Gasteig Munich in Germany, Vienna Musikverein, Allegro Vivo and Grafenegg Festival in Austria. Their international tours have brought them to many European countries as well as China, Turkey and Zimbabwe.
READ MORE ↓

Trio Klavis performs classical works ranging from Brahms to Shostakovich, Haydn to Rachmaninoff, alongside new arrangements and compositions of their own. They are dedicated to bringing a fresh and noble new sound to these treasured masterpieces and have already successfully convinced some of the world’s most conservative audiences.
As pioneers of this unique combination of instruments, Trio Klavis passionately engages with newly written music and are determined to expand the existing repertoire for this instrumentation, securing a place for it as one of the essential formations in modern chamber-music playing.

Trio Klavis regularly receives original compositions from acclaimed composers, excited to write for their ensemble. Aleksey Igudesman’s “Take It To Eleven” dedicated to the trio has been published by Universal Edition.

Richard Dubugnon’s Mikroncerto lllb which he wrote for Trio Klavis has been praised as a “golden addition” to the repertoire. The trio recently produced an independent music video for Hyung-ki Joo’s “Mad For Seven” which he wrote for them, which was awarded Best Music Video by the Monkey Bread Tree Film Awards.

Trio Klavis are winners of the Bank Austria Art Prize, as well as recipients of the Scholarship for Music of the Federal Chancellery of the Republic of Austria.

Their debut CD “Geography of Sound” was released by Orlando Records in 2016. Their upcoming CD with works by Brahms, Shostakovich and Krenek will be released in 2020.

*All works adapted for saxophone by Miha Ferk.