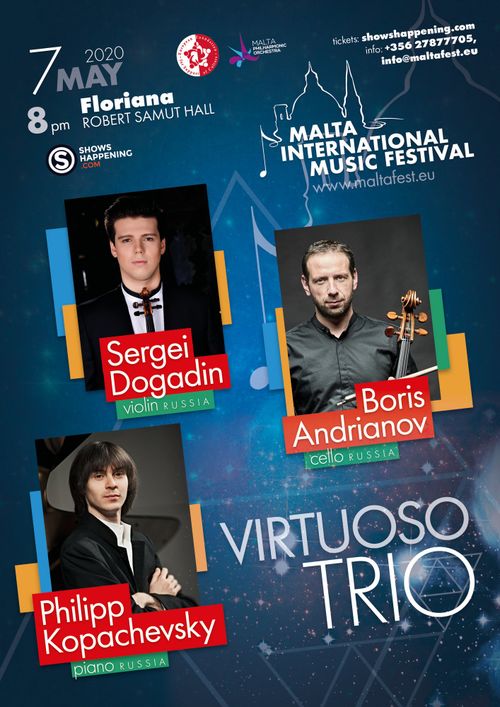 Boris Andrianov performs concerts at Russia’s finest venues as well as at prestigious concert halls in The Netherlands, Japan, Germany, Austria, Switzerland, the USA, Slovakia, Italy, France, South Africa, South Korea, India and China among other countries. In September 2006, Boris Andrianov performed concerts in Grozny (Chechnya). These were the first classical music concerts in the republic since the start of the Chechen War.

In 2003, Delos Records released an album by Boris Andrianov recorded together with leading Russian guitarist Dimitri Illarionov; this recording was in the preliminary list of nominations for a Grammy award. In September 2007 Boris Andrianov’s CD, recorded with pianist Rem Urasin, became Gramophone magazine’s “Choice of the Month” CD.

In 2014-2015 Boris released 4 new CD's! One of them is with the Grammy Award Winner, Bosnian lute player Edin Karamazov, another CD is with J.S. Bach Three Gamba Sonates in transcription for cello and bayan with famous Russian bayan player Yuri Medyanik. Two other CD's, with Dimitry Illarionov (4 folk suites) and with Rem Urasin (original transcriptions of Shostakovich and Rachmaninov music) were released in Paris and London.

Since 2005, Andrianov has played the “Domenico Montagnana” cello from the Russian State Collection of Unique Musical Instruments. Since 2009 he is a professor of Moscow State Tchaikovsky Conservatory.

A soloist of the Moscow State Academic Philharmonic and a prize-winner at international competitions, the young pianist Philipp Kopachevsky had won tremendous audience admiration and acclaim by the age of twenty-five He regularly appears in recital in Great Britain, Germany, the USA, the Netherlands, France, Italy, Greece, Poland and Spain as well as throughout Russia. Kopachevsky has won particular popularity in Japan, where especially for NHK TV he recorded a disc of piano music by Chopin.
READ MORE ↓

“The young pianist’s playing has a perceptibly personal message. The natural blend of mastery and spiritual maturity with raw emotion, the freedom with which the pianist expresses himself and his Romantic sincerity and nobleness win one over from the very first notes...” “From the first notes he plays, you sense the pianist’s powerful and lyrical individuality. His piano sings – this is a very rare quality nowadays, typical of a Romantic worldview; he retains clarity in his pianism and his phrasing is beautiful and pliant...” These are the kind of reviews Philipp Kopachevsky receives from music critics.

Philipp Kopachevsky was born in Moscow in 1990. He graduated from the Central School of Music of the Moscow State Tchaikovsky Conservatoire. He is currently a student at the Moscow Conservatoire (class of Professor Sergei Dorensky). Philipp Kopachevsky has been a prize-winner at eight prestigious international competitions, among them the Х International Franz Schubert Piano Competition (Germany) and international Piano competition in Enschede (Netherlands)

He performed at the world premiere of choreographer Benjamin Millepied’s ballet Without at the Mariinsky Theatre.  Philipp Kopachevsky is involved in the Moscow State Academic Philharmonic’s project Stars of the 21st Century.

In 2003 Sergei Dogadin and the Ulster Symphony Orchestra recorded the Alexander Glazunov's violin concerto for BBC.

In 2008 he has released his first CD album on the “Solo Musica” label (Munich, Germany), including the compositions by Peter Tchaikovsky, Sergey Rachmaninov, Sergey Prokofiev and Alexander Rosenblatt.
The 2017/2018 season brought the release of two CD albums:

Since 2017 Sergei Dogadin is a guest professor at the Liangzhu International Arts Academy (China) and the Gracias Music Academy at the School of Mahanaim (USA).

At the same time he constantly gives masterclasses in South Korea, Singapore, Latvia and Azerbaijan.

Sergei Dogadin had enjoyed the honor of performing during several festivals on Niccolo Paganini’s and Johann Strauss’s violins.

At the moment he plays the Domenico Montagnana violin (Venice, 1721) provided by "The Rin Collection" (Singapore).