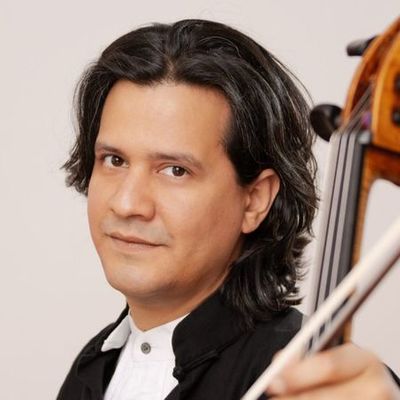 The German-born cellist of Peruvian-Uruguayan descent is one of the most sought-after musicians in his field. As a student of Boris Pergamenschikow, Claudio Bohórquez achieved success at an early age at international competitions such as the Tschaikowsky Youth Competition in Moscow and the Rostropovich Cello Competition in Paris. This culminated in 2000 with three awards at the first International Pablo Casals Competition held under the auspices of the Kronberg Academy: Marta Casals Istomin presented Claudio Bohórquez with first prize, a special award for the best chamber music, and also the use of Casals’ Gofriller cello for a period of two years. He also won first prize at the International Music Competition in Geneva, an achievement that marked the start of his career as a soloist. Meanwhile he has become a teacher himself: from 2011 to 2016 he was professor at the Musikhochschule Stuttgart, in September 2016 he was appointed to the Hochschule für Musik "Hanns Eisler" Berlin, where he has been a guest professor since 2003.

Among others, Claudio Bohórquez has performed with almost all German radio orchestras, the Staatskapelle Dresden, the Leipzig Gewandhaus Orchestra, the Wiener Symphoniker, the Collegium Musicum Basel, the Orchestre de Paris, the Orchestre Philharmonique de Radio France, the Tonhalle Orchestra Zurich and the Academy of St. Martin in the Fields. In Japan, he performs with the NHK Symphony Orchestra and the Tokyo Philharmonic Orchestra. In the US, Claudio Bohórquez recently gave concerts with the Boston Symphony, Chicago Symphony, Cleveland Orchestra, Detroit Symphony, Los Angeles Philharmonic, National Symphony and the Philadelphia Orchestra.

Claudio Bohórquez is a guest at numerous festivals. Among them are the Casals Festival in Puerto Rico, the City of London Festival, the Penderecki Festival in Warsaw and the Jerusalem International Chamber Music Festival. Appearances in the United States have included performances at the Tanglewood, Ravinia and Aspen Festival as well as the Hollywood Bowl. He participated in the chamber music festival Lockenhaus in Austria and at Gidon Kremer's festival "Les Musiques" in Basel. As a passionate chamber musician, he has performed together with Jörg Widmann in Bilbao/Madrid, and with Viviane Hagner and Jonathan Gilad at the Beethoven Marathon at Konzerthaus Berlin.

In addition to numerous CD recordings, radio recordings and television appearances Claudio Bohórquez worked as an interpreter for the soundtrack of Paul English by to the film "Ten Minutes Older - The Cello", which was shown in theaters worldwide. Together with the painter Klaus-Peter Kirchner, Claudio Bohórquez developed the installation project "Raum für Pablo Casals" in homage to this great cellist. He was part of the ECHO-winning album "Four Seasons" (2017) of Daniel Hope, released by Deutsche Grammophon. In July 2018 Berlin Classics will release a new CD with the sonatas of Johannes Brahms and some bonus tracks together with Claudio Bohórquez's duo partner Péter Nagy.

Since the season 2017/18 Claudio Bohórquez is Artistic Director of the Festival Winnenden.