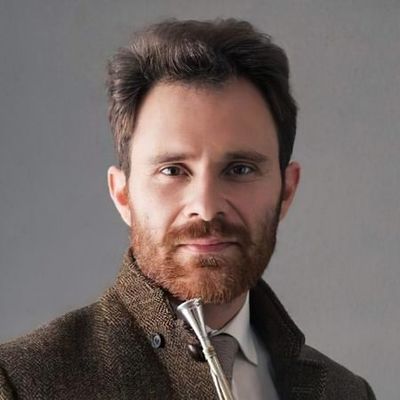 Born in 1983, Etienne is a native of Malta and took up the horn aged ten at the local band club and under the tuition of Raymond Cremona, Emanuel Spagnol and Paul Borġ. Etienne became third Horn of then the National Orchestra of Malta aged eighteen. He gave up this post after two years in order to pursue a full-time postgraduate course at the Royal Academy of Music in London, fully funded by the ABRSM. Etienne is nowadays an Associate of the same institution and is also a pupil of Fergus McWilliam and Markus Maskuniitty. For two consecutive years Etienne was principal horn player of the European Union Youth Orchestra under the conductorship of Bernard Haitink, Sir Colin Davies and Vladimir Ashkenazy. Over the years he has also guested as principal horn with some of the finest orchestras and performing groups of Great Britain as well as internationally, such as; the Royal Stockholm Philharmonic Orchestra, Scottish Chamber Orchestra, Seoul Philharmonic Orchestra and Orquestra Sinfónica do Porto at Casa da Música. In 2006 Etienne was appointed associate principal horn of the BBC Scottish Symphony Orchestra which position he kept and treasured for ten years. In 2016 he gave up this post as so to become principal horn of the Malta Philharmonic Orchestra.

As a soloist Etienne appeared at the Purcell Room and Wigmore Hall, at some of the finest venues in Malta as well as a few more in central Europe. During the Edinburgh International Festival of 2006, Etienne took a solo part in Schumann's Konzertstück for 4 horns accompanied by the BBC Scottish Symphony Orchestra. Later that year he also particiapted as soloist with the purpously-formed European Brandenurg Ensemble by Trevor Pinnock in recording Bach's Brandenburg Concerto No.1. Etienne has also performed for several times both of the Strauss concertos with the Malta Philharmonic Orchestra, 'Orchestre-Atelier Ostinato' of Paris and the Armenian State Symphony Orchestra.

Over the years Etienne has also recorded two solo albums for the record label 'divine art', one is named 'Fantasie', which album features the 'Fantasie Sonata for Horn and Piano' dedicated to him by his dear composer friend the late Charles Camilleri, and the other named 'Mdina'. Etienne is also a founder member of 'Carnyx Brass'.

In his free time Etienne keeps very active as a sportler, mainly as a cyclist in which he has comparatively come on a long way in a relatively short space of time.