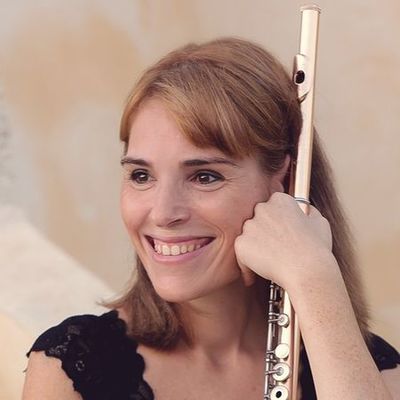 Maltese-born flutist Fiorella Camilleri started playing the flute at the age of 14. Since then she has been an active chamber musician with different ensembles playing a varied repertoire ranging from the classical to the contemporary. Fiorella uses her chamber music groups to promote the notion of Cultural Diplomacy and International Music. Her latest chamber music achievement is the formation of the Cinco Flores flute and guitar duo with Mexican guitarist Andres Gonzales Najera. Cinco Flores duo has performed at the Mood Indigo Festival, in Mumbai (December 2019). The duo specialises in world music and contemporary music. Fiorella is also the founder of the Catal flute and guitar duo, with cuban guitarist Ahmed Dickinson Cardenas, specialising in Cuban Music. In 2019, the duo recorded a monographic album featuring music by cuban composer Eduardo Martin. In January 2020, Fiorella will be performing at the International Guitar festival, Identidades 2020, in Havana, Cuba, with guitarist Galy Martin and Ahmed Dickinson Cardenas. Fiorella is also the founder of the Trio Sonaire, featuring flute, viola and guitar. The trio’s debut will be In Havana, Cuba in January 2020, peforming music by and for Cuban composer Leo Brouwer.

In 2012, Fiorella was the cofounder of the Camilleri Lucini flute and guitar duo. The duo performed in Italy, Malta and Japan respectively. Their chamber music achievements led them to Shizuoka and Tokyo in Japan, where Fiorella led a research based project merging Maltese and Japanese traditional music (2017). This project was supported by the Malta Arts Fund.

In 2018, she was accepted to participate as an artist at the Aurora International Music Festival in Sweden. Previously she has attended a number of master-classes; namely with Peter Lukas Graf, Marina Piccinini and Nicola Mazzanti. In 2007, she won the Young Musician Award, which enabled her to go and study at the Thames Valley University at the London College of Music, studying with Christine Hankin. Fiorella holds both ATCL and LTCL diplomas with distinction.

Furthermore in April 2012, she finished the two year Masters degree “Biennio Specialistico” in Flute performance at the conservatory of music ‘Orazio Vecchi Tonelli’ in Modena, under the tuiton of Michele Marasco (principal flute of Orchestra Regionale Toscana), Andrea Oliva (principal flute of Academia Santa Cecilia in Rome), Gabriele Betti; and Salvatore Vella (principal flute of Teatro Bellini Catania). Her masters thesis was about chromo synaesthesia, exploring the relationship between sound and colour.

For the past 15 years Fiorella has been holding the sub principal flute/ piccolo chair with the Malta Philharmonic Orchestra. Fiorella plays on a 14K Muramatsu flute and on a Philip Hammig granadilla wooden piccolo. In addition to  her music career Fiorella holds a Bachelor (Hons) degree in International Relations from the University of Malta (2004).