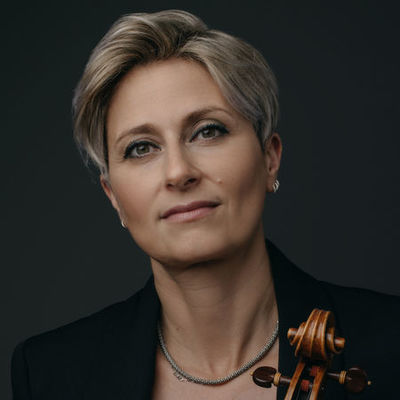 Nadia Debono has been the Viola Principal of the Malta Philharmonic Orchestra (MPO) since 2013. As a member of the MPO she has taken part in a number of concerts in prestigious halls, such as the Vienna Musikverein, Berlin Philharmonie, Frankfurt Opera, Philharmonie Gasteig in Munich, Hall and Grand Hall Tchaikovsky Conservatory in Moscow, Hall of the Mariinsky theatre in Saint Petersburg, Carnegie Hall New York, Verizon Hall, Philadelphia and Music Centre Strathmore in Washington DC, Dubai Opera, Smetana Hall in Prague and Reduta theatre, Bratislava. Her orchestral experience began in 1996 as a violinist of the Manoel Theatre Orchestra which later became the National Orchestra and eventually the MPO. In 2001 she became co-leader of the MPO, and also played as leader in various concerts, especially in Baroque music concerts. Furthermore, she also performed as a soloist with the orchestra, and in this role she appeared in Bach concerts (Brandenburg Concerto no.5, Triple Concerto for Violin, Flute and Harpsichord), Vivaldi (Autumn from the Four Seasons), Geminiani (Concerto Grosso ‘La follia’), Schnittke (Concerto Grosso no.1) and Piazzolla (The Four Seasons of Buenos Aires).

Nadia has also played with various foreign orchestras. In 1995 and 1996, she was selected as a violin member of the Orchestre Des Jeunes de la Méditerranée for two consecutive years, and with this orchestra she took part in concerts in various cities around the Mediterranean. In 1999, she played with Michail Jora Philharmonic Orchestra of Bacau, Romania, and in 2002 she took part in a performance of the whole Wagner’s The Ring of the Nibelungs with the National Youth Orchestra of Ireland, in Limerick and Birmingham Symphony Hall. Furthermore, during her professional years, she has been asked as a guest viola with various orchestras, namely the European Union Orchestra and Italia International Orchestra, under the direction of Ion Marin and Fabio Luisi.

Her music formation began in 1984 when she started violin studies with Joseph Psaila. She later continued with Mario Bisazza and Bulgarian violinist Joachim Atanassov at the Johann Strauss School of Music. During her school studies she performed Mozart Violin Concerto No.3, as a soloist with the School of Music Orchestra. Years later she also began studying the viola, and in 2018 she obtained a Fellowship from the London College of Music, under the supervision of Michael Laus.

Meanwhile, in 2003 she began specializing in Baroque violin performance in London with Kati Debrentzeni. In 2009, Nadia also followed an audition course and masterclass with the European Union Baroque Orchestra, after which she was chosen to play in various concert tours across Europe. She was also a member of the New Century Baroque Orchestra, with which she toured for concerts and also played in CD recordings of Haydn (Nelson Mass) and Mozart (Requiem and Clarinet Concerto). Throughout her career, Nadia has played with many prestigious musicians, including Chiara Banchini, Bojan Cicic, Margaret Faultless, Leonardo Garcia Alarcon, Mira Glodeanu, Edward Higginbottom, Petra Müllejans, Enrico Onofri, Anton Steck and Lars Ulrik Mortensen.