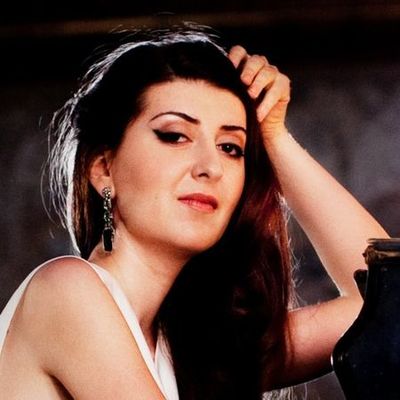 Nareh Arghamanyan, a winner of more than 18 international competitions including the prestigious 2008 Montreal International Music Competition, is a Vienna -based Armenian- Austrian concert pianist. A Bösendorfer artist, Nareh is acclaimed for creating a unique intensity of dialogue between music and her audience, by immersing herself in the idea and becoming the vessel through which, the music speaks: with “elegance, humor, fiery imagination“, and a “unique sensual narrative tone”. Her “precise stylistic approach”, “dazzling technique” and “charismatic stage presence” have made headlines and have moved critics and audiences, conductors and orchestras alike: Musical America Magazine described her as “major, major, major talent…a potential superstar”. From Musikverein in Vienna to Lincoln Center in New York, Nareh dazzles her audiences. She has appeared in the last seasons at theWigmore Hall, Philharmonie Berlin, Laieszhalle Hamburg, Herkulessaal Munich, Wiener Konzerthaus, Gewandhaus Leipzig, Konzerthaus Dortmund, Tonhalle Düsseldorf, Gardner Museum Boston, Philadelphia Kimmel Center, Petronas Hall Kuala Lumpur, Osaka Concert Hall Japan, to name only a  few.

Highlights in 2021/2022 includes her appearances in Sweden with Helsingborg Symphony Orchestra, Bergische Symphonic Orchestra  and Dortmund Philharmonic in Germany, Lucerne Symphony in Switzerland, several recitals in France as well as orchestra tour in Russia appearing in Kaliningrad, Saratov, Kazan, Barnaul, Vologda, Novosibirsk, Voronezh, etc . She was also appointed as jury member in the famous Bolzano Busoni piano competition in Italy, Classic on Danube Festival in Vienna.

Following her successful debut solo album released in 2009 with the Canadian Analekta Label, Nareh in 2011 signed with Pentatone Records, releasing a CD of solo works by Rachmaninov to great critical acclaim. She was selected as “Artist of the Season” by Pentatone and partnered with the Rundfunk-Sinfonie Orchester Berlin and Alain Altinoglu to release recordings of all of Liszt’s piano-orchestral works as well as Prokofiev and Khachaturian Piano concerti to great acclaim. She also teamed up  in 2018 with the Munich Chamber Orchestra and Howard Griffiths to record the piano concerto by Franz Danzi – which was released by Sony Classical in 2018 to great acclaim. Her recent CD in 2021 includes solo piano works by Brahms and Tchaikovsky. Another CD with solo works by Vardapet Komitas will be released  by the end of 2022.

At the age of six years, Nareh was hailed as a “Prodigy” and went on to win more than 18 international awards and prizes, including 1st Prizes at the 2007 Piano Campus International Competition in France, the 2005 Josef Dichler Piano Competition in Vienna, the 1997 Chopin piano competition. But her major breakthrough came at the age of 18, when she won the 1st prize and all special Prizes at the Montreal International Musical Competition in 2008, thus making a history as the youngest winner ever. Nareh studied with Alexander Gurgenov at the Tchaikovsky Music School in Yerevan and at the age of 15 became the youngest student to enroll in the University of Music and Performing Arts in Vienna in the class of Heinz Medjimorec. She continued her studies with Avedis Kouyoumdjian as well as with Arie Vardi in The Hanover University of Music and Drama.  From 2016-2018 Nareh has been appointed as the Artist-in-Residence at the Queen Elisabeth Music Chapel in Brussels, under the supervision of Louis Lortie.

She also is highly engaged on benevolent causes and regularly participates and performs for charity projects in France, Germany, Austria, Armenia and USA, including support for children suffering of leukemia in Armenia, assisting orphanages and disaster zone victims. Nareh has helped gather in excess of 200.000 Euros for benevolent causes.

Since 2016 Nareh has served as artistic director of “Austrian Piano Open” piano competition in Vienna,“Classic on Danube” International Music Festival in Vienna and “ Zartonk Summer Music Academy “ in Armenia.