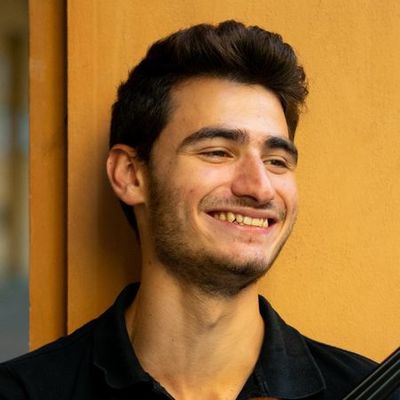 Samuel Cutajar started the violin at the age of 6 under the tutelage of Antoine Frendo, with whom he obtained his Licentiate of Trinity College London. Samuel will be studying in the Royal Academy of Music for his Masters Postgraduate from September under the direction of Profs Philippe Honoré. He was an undergraduate at Trinity Laban Conservatoire of Music and Dance studying with Profs. Clare Thompson. He was awarded an internship with the Malta Philharmonic Orchestra in 2017 and has since become a regular part-timer with this same orchestra. With the MPO he was fortunate to perform in prestigious halls such as Berliner Philharmoniker, Muzikverein and Smetana Hall During his conservatoire years, he had the honour to be concertmaster of the Trinity Laban Symphony orchestra and Principal Second violin of the Universities of London Symphony orchestra.

Samuel has recently been accepted to form part of Sinfonia Cymru in Wales, an ensemble promoting young talents across the UK. He has also been member of the Mediterranean Youth Orchestra and Stoneleigh Youth orchestra 5 years ago. He has been part of the Malta Youth Orchestra for the past 10 years this being his first ever orchestral experience.

Samuel has been a member of the EU Youth Orchestra since 2020 performing with world renowned conductors such as Ivan Fischer, Gianandrea Noseda, Vasily Petrenko, Elim Chan, Pekka Kuusisto and Gustavo Gimeno.

He won the Vera Kantrovich Bach Competition in 2020 and has achieved special mention in various other competitions held in London. He recently won the Maltese talent show "Brillanti" competition, giving Samuel his first solo opportunity this evening with the Uzbekistan National Symphony orchestra.

He performs on a violin made by Giovanni Gagliano c. 1800.